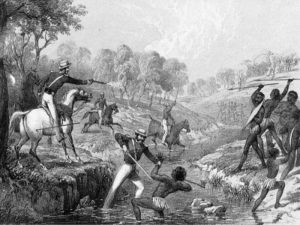 In May 1813 Blaxland, Wentworth and Lawson and First People guides following existing tracks changed the colony from a confined, insulated tract of land to a rich and extensive British settlement. Squatters and sheep invaded the country. And the Black War and genocide begins. 1817 the first bank, Bank of N.S.W. opens. 1818, the first Chinese immigrants. 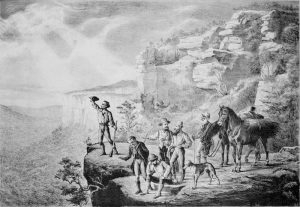 1836 Darwin visits, notes the disappearance of aborigines and game. The new land, is sold to pay for free immigration from Britain right up to the 1960s.

In 1838 Waterloo Creek, a mounted troop killed at least 9 Aborigines, followed a couple of days later by Myall Creek, 28 Aboriginal adults and children were de-capitated and burnt. The two trials in Sydney prosecuted by Plunkett caused outrage. Squatter Meyrick “no wild beast of the forest was ever hunted down with such perseverance” he concluded “aboriginal people will shortly be extinct”.